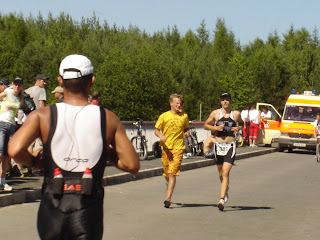 Here is an old report from my first long distance in Roth, oh man, how nice it was the first time without any pressure 🙂 (In the picture Moritz accompanies me at km 32, I was so exhausted that I couldn't even talk anymore)

Since this was my first long distance, I will describe my report in detail and also describe my feelings, so it can take a little longer.First of all, I would like to say that every participating DJKer did a great job and, apart from inexplicable time penalties, probably also their desired times or Has reached dream times. Without the presence of the other club members, my fantastic fan club and also some DJs who had traveled, I would not have been able to motivate myself to persevere. Many thanks for the support!

My excitement was still limited until the evening before, but then rose immeasurably when I arrived early for the swim start! Seeing all the fit and sometimes old hands made me very nervous. At the swim start I was pretty far up in the row and when the starting gun was fired, I forgot all of my swimming tactics and, as always, started much too quickly. I remembered Jürgen's advice and attached myself to what I thought was a fast swimmer and pursued him for a while. I'm pretty sure that at some point I followed others as well, in any case I tried to swim in the swimming shadow the whole time. Of course you want to show it to “others too. Shortly before the end, I was so exhausted that I thought I couldn't get through the rest. But it went so well and the feeling of my neo made the swimming part just awesome.

Accordingly motivated, I threw myself on my bike with trembling arms and immediately broke my sunglasses. As I noticed after cycling 130km, I only had the right lens in the frame and no one said anything, that's why my vision was so strange the whole time 🙂 I threw it away and drove on without it. The first lap was just awesome, I've never had so much fun racing. The Solarer Berg was awesome, I turned the corner and thought to myself “Oh my God, so many ... My family and friends were there too, who made the whole moment even more beautiful. At the beginning of the 2nd lap, reality caught up with me and I got quite a hangover. When Jürgen caught up with me at km 120, the low point was probably reached and I thought the whole time, just don't lose too much time. Some time and many gels later I felt better and luckily lasted until the change. I had never eaten as much on the bike as on that day, sometimes I had to burp the whole time and had stomach ache, but I really wanted to avoid the much-feared hunger bite (which I had long since gotten;). The time on the bike went by comparatively quickly, although sometimes I thought to myself; "Oh shit, now at least 6 hours until the end.
The first kilometers of running went very well, I had to slow down at times and not run too fast, when I caught up with Jürgen, I felt even better. That had been a real motivational boost. But apparently for him too, because I didn't get much further away from him until kilometer 28. But not that fast yet ... it went really well up to kilometer 15, then misery slowly crept into me. I thought of giving up every meter, the kilometers got longer and longer, sometimes there were no kilometer boards for ages and I was really desperate. The only thing that kept me going was the thought of all my supporters and the "two in the neck." There were moments when I just swore to myself and wondered why I was doing this in the first place. I want to mention that Gregor made a deep impression on me with his great gesture at km 30 and that I felt better again from then on. I was even able to increase the last few kilometers to keep the incredibly tough Jürgen away. The running in was great again, everyone called; "Enjoy it and you made it, a great experience that I only realized much later on the way home. Many thanks to my training partner Gregor for the important and correct preparation, even if it was sometimes tough it all paid off in the end! Especially for the new, but also for some of the long-established ones: Gregor is a very good contact person for training plans and long-distance preparation, without him I would have done my completely unsuitable training schedule and made many beginner mistakes that I was spared, and would have been in the 2nd Overturned bike lap. Dennis, thank you for bringing me to this sport and serving as a role model.