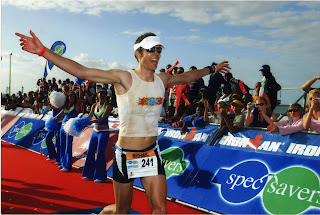 In mid-March we (Dobi and Michael) made our way to sunny South Africa to contest the Ironman there. Thanks to our mild winter, the preparation for the season was relatively good and enabled us to start with a few kilometers in our legs. Just like Dobi, I got my new speedster shortly before, which thanks to its red / white design matched my helmet well.

We landed in Port Elizabeth a few days before the competition and were able to acclimatise a little, and for me it was the first time that I experienced the entire race organization and preparation and the increasing tension. Since all the routes were fixed, we were able to swim off the swimming route a few times and do a 60km lap on the bike. We had our first disappointment when we swam a swim lap, did it relatively quickly and still took 33 minutes, that didn't bode well for the day of the competition. The bike course was no fun in the first half because we drove through the middle of the city traffic and all of us Cars and everything else that had 4 wheels that took right of way and cut the path. Cyclists were apparently not a common sight here. In the second half we finally escaped the city and it became unusually quiet on the street, but the asphalt was suddenly rough and the wind was strong. The last third of the bike route made up for everything, however, here the path led directly along the sea and the view was absolutely amazing, unfortunately just like the wind, so that we got back to our guesthouse after exactly 2 hours.

We were accommodated in the immediate vicinity of the swim start, in a small but really nice guesthouse with a great breakfast. The last 2 days were quiet and we were able to gather our last strength. A little more restless were some of the co-starters who ran up and down the pier until the last minute or like the Swedish professional Björn Anderson, constantly dashing along the coastal road in front of our noses. Saturday was bike check-in, including marveling at all the other bikes and their well-trained owners . After handing over the interchangeable bags you were even weighed and the weight, 82.2kg for me, was written on your hand. Unfortunately, I had to find out what it was all about later after crossing the finish line. After a halfway restful night for me, how it fared Dobi, unfortunately I don't know, I went to the transition area at around 5am. After I checked and checked everything on the bike for sure 243 times, it was already light and the swim start was not far away.

I missed the swim-in because I hadn't checked which entry point to use for it until the end. So I tried to get up to the front as far as possible and ended up in the third row. The 1500 competitors were lined up in endless queues in a 50-wide corridor and formed a splendid sight. The professionals were allowed to stand by the water about 15m in front of us, which turned out to be too little a few seconds later! After the starting shot, most of them ran off as if there was no tomorrow and those who had started before were beaten up in the water by a wild group of agegroupers after 5 seconds. The waves were very high at 2.5 meters and spit out quite a few swimmers on the beach. My initial tactic of swimming to the far right was impractical because I was simply trimmed in within a few milliseconds. To my astonishment, however, the fight broke up quickly after the first turning buoy and I was able to swim unhindered. After I swam next to Natascha Badmann, clearly recognizable thanks to her bathing cap, and even offered her my swimming shadow once (she actually had to give me some of the prize money!), The old feeling of competition was back! I was looking forward to everything that was to come. The first lap ran as expected with about 34 minutes, but I noticed that we ran around the beach for at least 200m before we were allowed to fight the stronger waves again. A little disappointed with my time, not knowing that the swimming times were generally quite slow and that the fastest one took just under an hour. So I ran after 1:12 and really knocked out and still completely disoriented into the transition area. The waves almost made me seasick!

The change went well, but a little too slowly, I have to practice more here. I immediately felt much more comfortable on the bike and had to brake right from the start so as not to set off too fast. Before the race I decided to keep exactly my heart rate values, which I set myself to 150-155 while cycling, about 10-15 beats below my threshold. This time the entire bike course was cordoned off and we could ride along the highway unhindered. From the beginning the cycling went great, although I held back, I caught up one after the other. At some point at 40 km I hit Dobi, whom I didn't even recognize because he was wearing a long sleeve jersey. "Dobi, were you cold?" From then on, an exciting race sparked between us in which no one was far from the other. Only towards the end I was able to get a bit of a head start, which was sorely needed because I lost my GPS watch and my right shoe a few meters before the second change when I wanted to get off my shoes professionally while driving. Here's the warning to everyone, if you have to practice beforehand, otherwise it won't work and you, like me, lose valuable time collecting. But not so fast. After the first lap, I checked my watch and could hardly believe my eyes. I was on the road that fast. Thanks again to Sebastian, who had previously assembled my bike perfectly and adjusted it to fit. Great part! The cycling went really well, except for a small phase of weakness after the 2nd of 3 laps and the fact that I ate less than I had planned and that a monkey ran 5m in front of my bike in the last lap, I was right with the bike split of 5:06 satisfied. This was the 19th best cycling time ever and, as I noticed later while running, it was also faster than some professionals. (Pat on the shoulder! 😉

As mentioned before, my change was a bit turbulent, with my watch in my mouth, my right shoe in hand and the left one on my foot, I walked around the changing garden a bit disoriented until a guard finally showed me the right way. The service in the Wechselzelt was all the better, sunscreen and an encouraging smile and off we went. Then what I actually wanted to avoid happened to me, I started running too quickly. According to my heart rate monitor, which showed pulse rates in the 150 range, I was running in the good range, but later when I looked at the times I noticed that I was initially running at 4:05, in the middle a 4:54 and at the end only a 5 : 45 cut. For the next time, this results in the knowledge that the speed must be taken into account and not just look at the heart rate monitor. Thanks to my initial running speed, I made really good progress and was in a great mood when a professional overtook me after 10km and asked me if I was one of the Swedes. Fortunately, I was able to deny this, "I mean honestly, I'm not that blonde either!" Unfortunately, in the middle of my high phase when I had just cheered on the cheerleaders, the man with the hammer caught me. Oh crap, I thought to myself, and now in the 2nd of three rounds. From then on, I shoveled even more into myself, including disgusting caffeine gels and sandwiches that had something black in them. Unfortunately I didn't drink enough, as it turned out later. Although I bravely struggled, the hammer man never let go of me. Step by step it became more difficult and the motivation turned into the opposite. The running course took us along the beach promenade, later through the university grounds and back again. When I was just turning from the turning point into the last lap, I saw Dobi shortly afterwards, who had now come closer again, which motivated me to put a few more coals on it and not start walking. It was just incredibly difficult because I was just finished and wanted to see the finish line. So I attached myself to a lapped one that had just overtaken me and let me be dragged until the end. I finally saw the finish line, unfortunately I had just missed the 10 hour mark, which I didn't really care about at the time, I was so happy to finally finish the whole thing.

I finished the race 32nd and 4th in my age group. I am very satisfied with that. After the finish line I realized how much the whole thing had strained me, I was able to take a few bites before I got so sick that I had to go to the medical tent. There I was weighed once and to my astonishment I now only weighed 77kg, a whole 5kg less than before the start! For 2 hours I lay around in the tent and I was injected three times a liter of nutrient solution. Even so, my blood pressure kept falling to 65:40 until it finally stabilized and I could walk. A little anecdote, the next day at the Hawaiian award, I accompanied a friend who was 2nd in my AK and wanted to know if he would make it. When our age group finally got it, it was said that 3 slots were available. Oh, I thought, great thing, maybe you're lucky. The first of our AKs turned it down, which means that I managed to get a Hawaii slot !! The jubilation was boundless. 10 minutes and some discussions later, our third slot was given to an older AK and it was gone again, my first qualifying slot for Hawaii. I was a bit disappointed, but luckily it was limited because I didn't expect it anyway and would have felt it was too early. In Frankfurt on July 1st I will start the next attempt!

One thought on “Ironman Südafrika 2007”