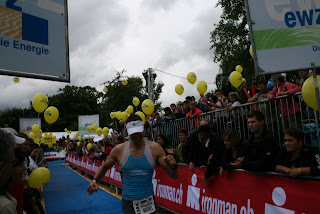 Hello everyone !!!
on Sunday the time had finally come and I was able to fulfill my dream of Hawaii. Punctually after 9:23 hours I turned into the target channel, looked around, saw no one and all the tension of the last months and the eardrum of the audience dissolved in my cheering !! That apparently cost me the last of my strength, because after the target channel I had to be put on the soft foam rubber mat first. There I was now. Put your feet up to stabilize my circulation, an apple spritzer in one hand and my certificate in the other. After several unsuccessful attempts by the supervisors to maneuver me into the hospital tent - for those who do not yet know, each infusion in Zurich costs 70 francs - I decided instead to let two strong men help me to the exit so that my support would not wait for me to let.
There I stood now, shivering from the cold, completely knocked out and tortured myself 30 minutes to the car parked 1km away. My little brother had to pick up all my things from the exchange area and then I was finally allowed to go to the hotel and asked myself during the trip how I could get into such a situation again ...

Punctually at 4 a.m. on Sunday morning I peeled myself out of my hotel bed in the constant rain, great, my mood was gone. After the daily mastering for the last few days, I only got a roll. Then Julia and I sit down in the car with bags and bags in order to get a good parking space (with wise foresight :)) and stood at the exchange area at 5:30.
There I stowed everything neatly in plastic bags right next to the large puddle in my place, what a day, actually I would have wanted to lie down again right away.
Accordingly motivated I went to the swim start and couldn't wait to finally get into the noticeably warmer water. We rode in an eternally long row in the water (2,300 athletes have to be placed somewhere) and it started, the caterpillar started moving, and with it 9,200 legs and arms, which desperately hit for space! One or the other also felt my extremities, especially the one who gave me a kick under my chin. After the water was so churned up by the rain that the distant buoys could hardly be seen, at some point I was satisfied and swam a few feet behind. At each buoy the crowd grew so great that it was a real pleasure! After going ashore halfway through the route, luckily it got a little quieter and I was able to breathe freely again. Nevertheless, I longed for the final exit from the water. It came at some point and under the best conditions (did I already mention that it was raining ??) or rather I slide to my changing place and tore the tarpaulin from my bike. Now I could start! A quick pair of rain overshoes and a long jersey and I was on the bike course. I felt a lot more comfortable here and caught a couple of fast swimmers 🙂
After 30km straight ahead on Lake Zurich, the first mountains finally came, otherwise I would probably have tipped off my bike with boredom, for everyone who knows Zurich, yes, it's a great city with a lot of flair, but to look straight ahead in these conditions, now and then To get a spray from passing cars was not a great experience. The marshals were quite numerous, but unfortunately they were the only spectators. Anyone looking for jubilation and heroism shouldn't get it here. While driving, I noticed that everyone that I overtook me quite effortlessly on the mountains again shot past me on the descents like the oiled lightning bolt in absolute courage ... aha ... I knew every time a local overtook me, the others - how I, too - drove down the partly 15%igen gradients with more love for life. Anyone who knows how carbon and disc wheels and all that newfangled stuff brakes in the wet will agree with me. At 85 km I finally saw my great support: Julia, my little brother Thomas and his girlfriend and of course my parents. Everyone had come to cheer me on and I was happy about it !! After exactly 2:30 I had completed my first 90km loop and, given the circumstances, found my time quite passable. After it rained less for a moment, I dared to hope that it could stop ... should I have been heard? In response, I was rewarded 10 minutes later with a whipping spray, which hit me right in the face due to the favorable wind, yes that was my world, soaking wet everywhere, even more rain, deserted streets, I started to smile and was happy for the first Get it right on this day 🙂
For the second lap, despite my new knowledge of the route, I gave myself a little more time, maybe it was the soaked overshoes and clothes that suddenly became 5kg extra weight, you don't know…. 😉
After the last few kilometers I longed for new things and an end to my “longest July day of the year” 🙂

I was supposed to get my new change of clothes, but there was no end in sight! This time I didn't want to lose anything in terms of fashion and chose the long white racing stockings to match my light blue running costume, garnished with a white shield on my head (against the sun ... haha) and trotted off. The new running route was very winding, but with 3 turning points and a few underpasses it was quite exciting and entertaining. You ran every 2 minutes in a different direction including the corresponding view. After 3km I saw Julia and the others and felt amazingly good. After a few short words and a visit to the toilet (yes, I sat down without wiping my glasses first !!!) I was back on the road. In the second round the same picture, the same toilet and at the door, luckily, Julia with Immodium was acute! And I have to say, this stuff really helps acutely! In the same lap, I also had my worst break-in of the day. I passed by Julia and my brother again and looked like a walking corpse again, as if I would break in again soon (as has often been the case in the past). However, Julia instinctively gave me a caffeine tablet and a minute later (no joke!) I literally flew over the track, I suddenly ran like a young deer and grabbed one after the other ... GrandMaster Krell on the way !!! Make way for his highness, push the mob aside !!! ... oh yeah .... :)))
Unfortunately, the first tablet worked the most, the second I hardly felt anything. Nonetheless, it just went, I couldn't believe it, in the middle of the 2nd round I was 16 in my age group. In the third round I shot past 9 people and in the last my pulse went over 160 and I ran over 3 other people from my AK in addition to the first woman and ran into the target channel as 4th. I looked around, saw no one and was so happy to finally see the goal, but also the time on the board that showed: 9:23 !!!
Oh yeah !!! The day was saved, the rain forgotten, Hawaii I'm coming !!!
Times: 1:00:20 swimming, 5:06 cycling, 3:11 running