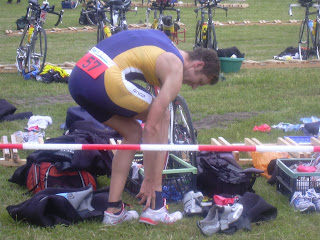 Sunday went very well, before that I wasn't in the mood at all, well you know that. The swim went well, I hung on a few fast feet and tried not to waste strength. My previous Rothsee swim was worth it, because I'm either after Dorian or Mirko and was good at following individuals
Practice swimmers. That paid off yesterday as there was no larger group in the front. However, the changeover time was added and the route was a little longer.
Get on your bike after 32 minutes. First I needed a while to warm up and at some point after 15km the Preissl overtook me, which I am right after me, wanted to see how long I can ride. And this De .. actually drives straight ahead at the next intersection instead of right and I also followed him 🙁
So hit the brakes, turn around and my chain jumps out, oh man, there he was and 5 people I had passed before. I was really upset, but then tried to calm down because it didn't work anyway and caught the 5 people again 😉
At the turning point I saw that I wasn't lying too badly and lo and behold, I can already see Christian W. coming towards me,
nice rolling in a group of 6! The rest of the first lap was pretty uneventful as I was alone in the wide hall. It was a flat stretch except for one or two mountains but quite windy yesterday. At the beginning of the 2nd lap I see only 37.5km on the speedometer instead of 40km,
well, I almost thought, otherwise the Normann could have dressed warmly :)))
Slowly but steadily, I worked my way up to 4th place and see Christian again at the turning point and still in the same position. There I made the decision: it will no longer overtake you today! 🙂

All in all a nice competition from the training that motivates me again!